Meduseld had lovely lambs again this spring and we are making some of them available for those who would like to purchase diverse breeds with good fleeces. 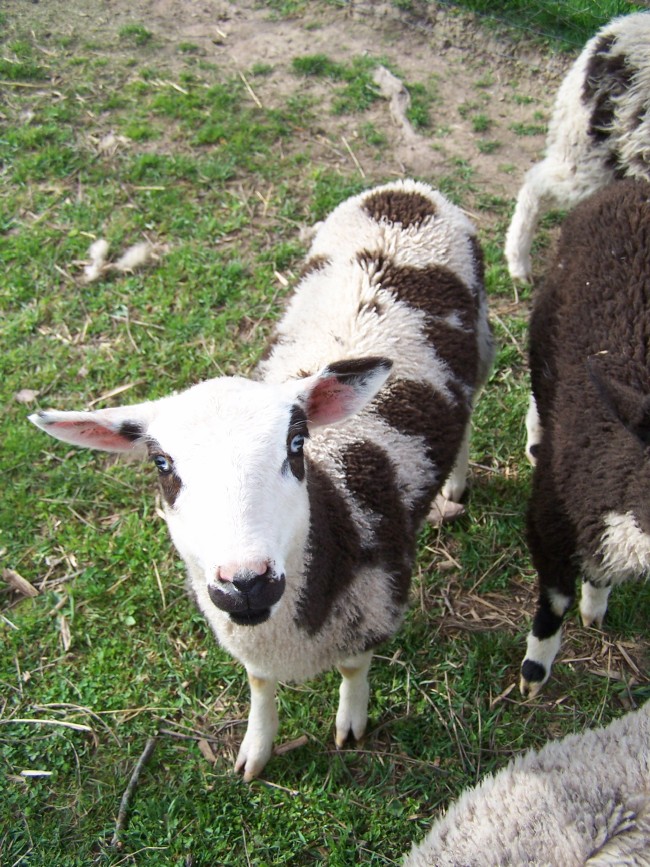 Breeds represented include Romney and Romney crosses, Dorset Down Crosses, Friesian crosses, and Jacobs.  The Romney are known for their luxurious shiny wool.  The Dorset Downs are not to be confused with Dorset meat sheep.  The Dorset Downs produce an exceptionally soft wool.  The Friesian are dairy sheep with soft, shorter fleeces and they have contributed to the soft yarn made here.  Finally, the Jacobs and Jacob crosses show the characteristic spots as well as resistance to parasites.

Some of these are extremely tame bottle fed babies, and others have been raised here by their mothers.   White, black and spotted sheep are available.  All have been wormed.  Prices range from $100 to $350. 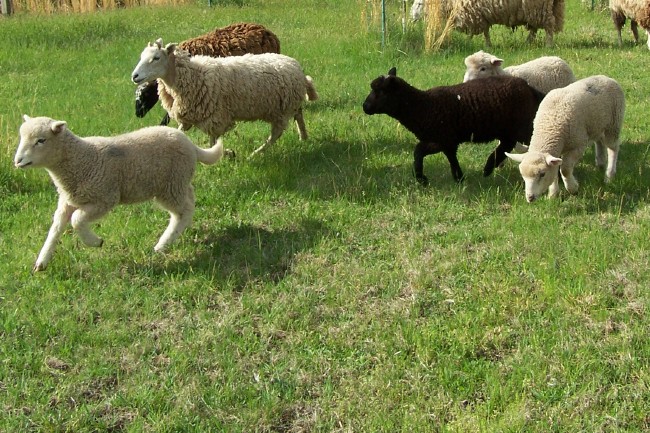 Views at the farm this snowy morning.  I don’t know why the sheep won’t go into the barn but they definitely have adequate insulation! 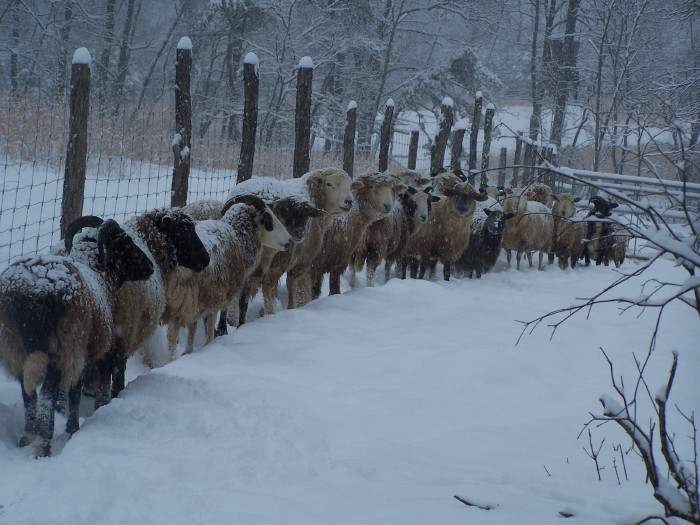 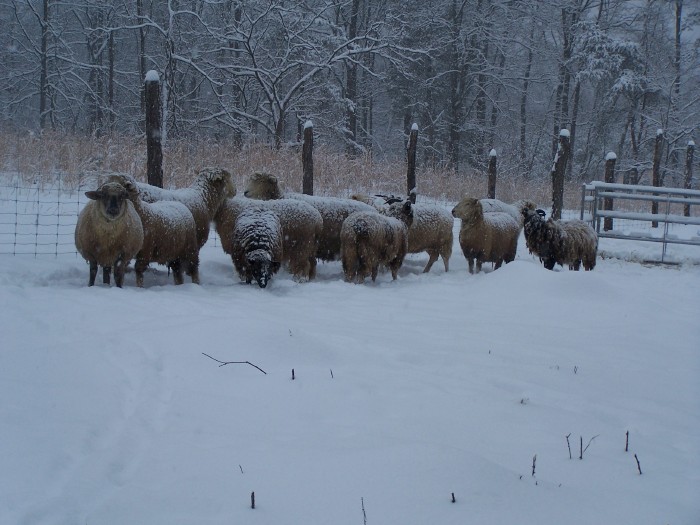 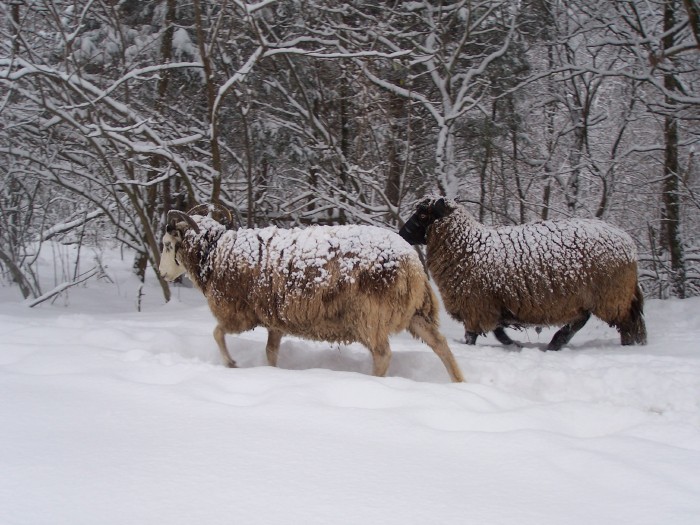 Thursday we had our sheep shorn, an annual event.  Our front porch is covered with labeled bags of wool, each containing the name of the sheep that provided  it.  This year, we were able to have Rachel Summers of the Crowfoot Farm come out and shear and I have never been as happy before with the professionalism of the shearer! 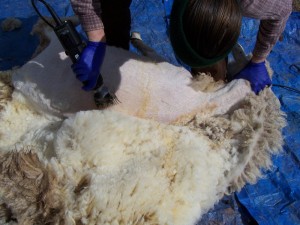 Rachel and her husband, Kevin, run Crowfoot Farm, and I encourage you to go to the link.  They raise quality GMO-free broiler chickens and free-range heritage turkeys.  We had the privilege of being able to visit their farm and we were totally impressed with the way that they raise the animals.  They raise several breeds of endangered heritage breeds and their blog is filled with information on their farm.  The turkeys truly were free-range, and the chickens are in moveable pens so that they are in fresh forage areas.  In addition, Rachel and Kevin go to great lengths to make certain that the feed is GMO-free.  If you are in the area, its worth a trip in order to stock up your freezer.

Rachel learned her shearing skills from a great shearer, and since she is also a spinner, she understands the importance of ending up with a nice fleece.  She left us with no second cuttings.  Second cuttings come from where the shearer passes over the same area twice, and this leaves short pieces of wool that cannot be spun and that tend to leave little nubs or bumps if inadvertently spun into the yarn.  The second cuttings have to be meticulously removed from the fleece, but in this case there are virtually none.

As a true professional, she cut the fleeces away from each sheep and it fell away in one large fleece.  This makes for easy  “skirting,” a process where we lay the fleece out and remove sections of the wool that are dirty, or that do not yield nice yarn, such as the legs and neck.  By the time a fleece is skirted, only the best parts of it are ready for processing, whether it be for roving, yarn, batts, etc.  The portions that are removed can be used for mulching garden beds or just thrown away.  I have read that these pieces used to be used for insulation, but I seriously doubt that would pass building code these days. 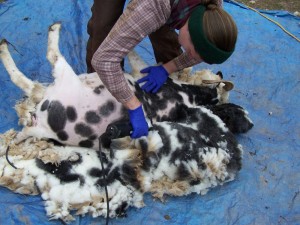 As each fleece peels away from the sheep I judge it for the type of yarn that it will make.  Factors that influence this decision include crimp, fiber length, sheen, and fineness.  I have sheep whose fleeces I always designate for the same type of yarn, especially if I have found good results in the past.  Royal, for example, is the source of those shiny skeins of Romney fingerling, and Clarabelle is the source of the buttery soft wool that I blend with Alpaca to make the brown bulky yarn that I can’t keep in stock.

Clarabelle and her Fleece

In the last twenty-four hours we have had more baby lambs, including from our largest ewe, Henrietta.  Here is a picture of one of our dorset down ewes with twins she had.  This photo was taken just after she had them and they have still not been completely cleaned off by their mother. 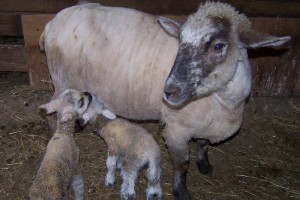 Dorset Down Ewe and Lambs

I have also finished another shawl for our store, this time made out of Meduseld’s Romney Fingerling weight yarn.  It is a reversible shawl with a beaded crocheted fringe.  You can find it in our store here. 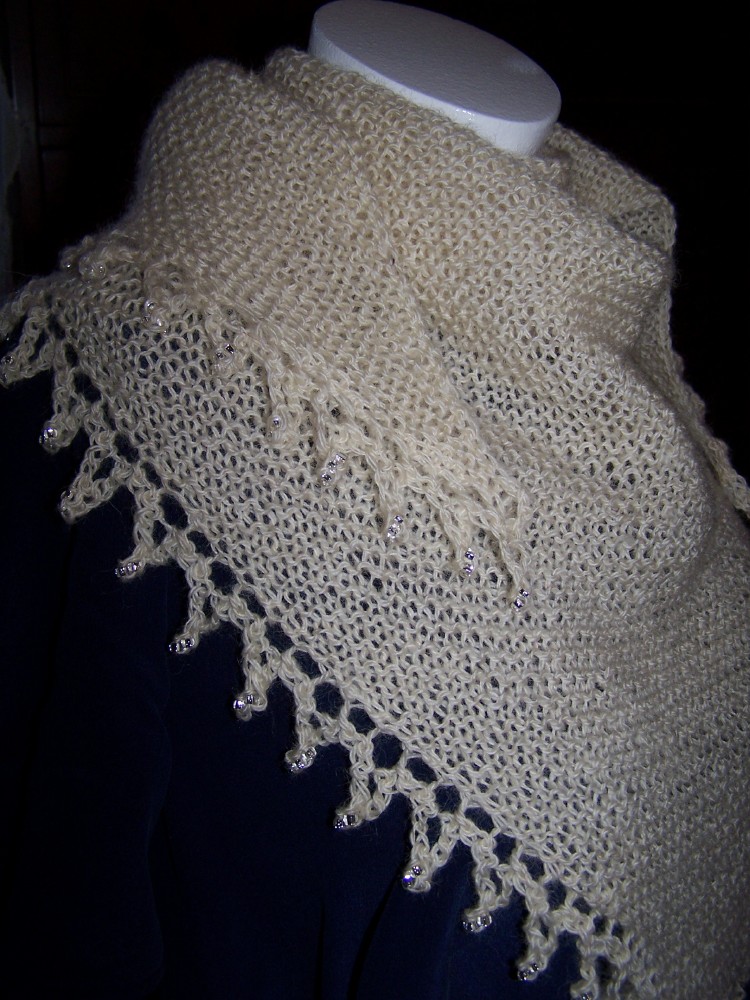 Today, on the Feast of St. Romuald, we welcome our first lamb of the 2013 lambing cycle.  He is a darling boy out of Lisl, a pure bred Jacob, and Samson, a Romney ram.  Say hi to Hans! 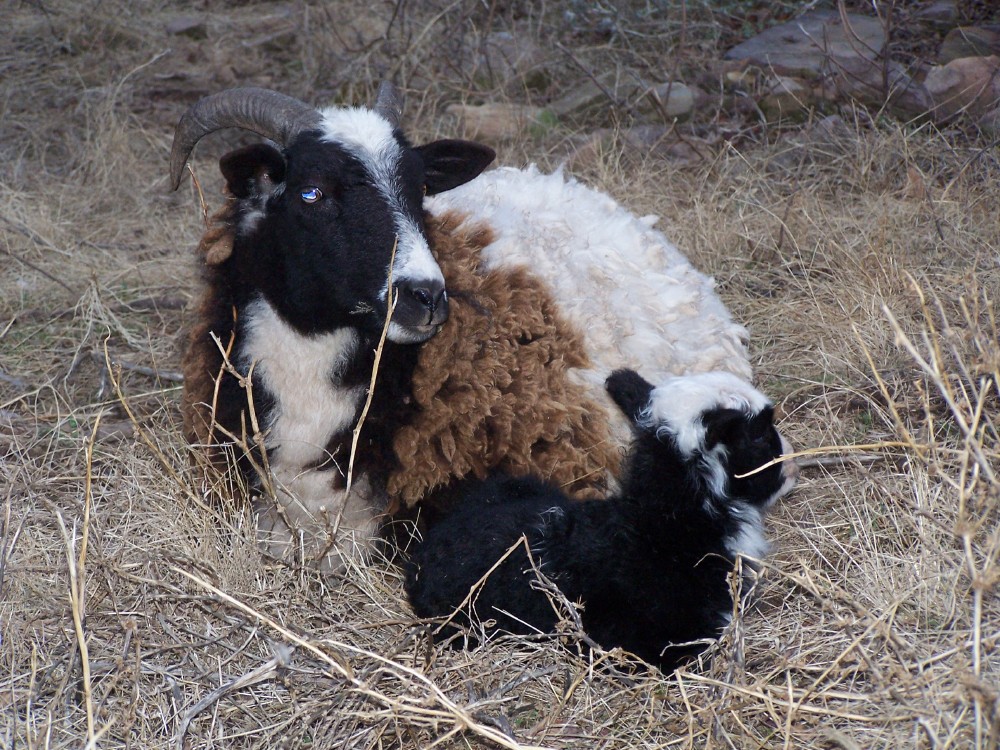 Over the next few weeks, we are going to go into more technical detail about specific sheep breeds and the yarns their wool yields.

There are hundreds of breeds of sheep in the world, and through deliberate and sometimes natural breeding, such as on isolated islands in Ireland, they have developed very specific breed traits.  These are manifested in their confirmation, the shape of their heads, and their wool.  Some sheep have horns and some don’t.   They also develop differences in resilience to disease and parasites.  There are some breeds that seem to tolerate crowded conditions and some that are weak and susceptible to health problems.

While wool is the most important issue for a fiber/textile operation, the shape of their heads also has a big impact.  For one breeding cycle here, we used a large Romney ram as sire.  Since some of our ewes are Romneys, we were seeking good pure breed genes.  And, since cross-breeding often improves other breeds, we hoped that this would add size and fiber quality to some of the Jacobs.   Unfortunately, this ram had an enormous head, which by Romney sheep breeder standards was a perfect head.  The poor girls had such difficulty birthing in the spring, though, that I had to literally pull 21 baby lambs during birthing.  They all survived, but doing that as a going concern was not going to be good for my ewes.  It explained why at the farm where we got the ram, many of their ewes were being delivered by c-section.  Yes, c-section.  Not good for the ewes, and a very expensive way to get yarn.

Ever since, we have selected rams with narrow heads, and the ewes are able to birth without help.

Today, we are going to discuss the Romney breed and its fiber in detail. 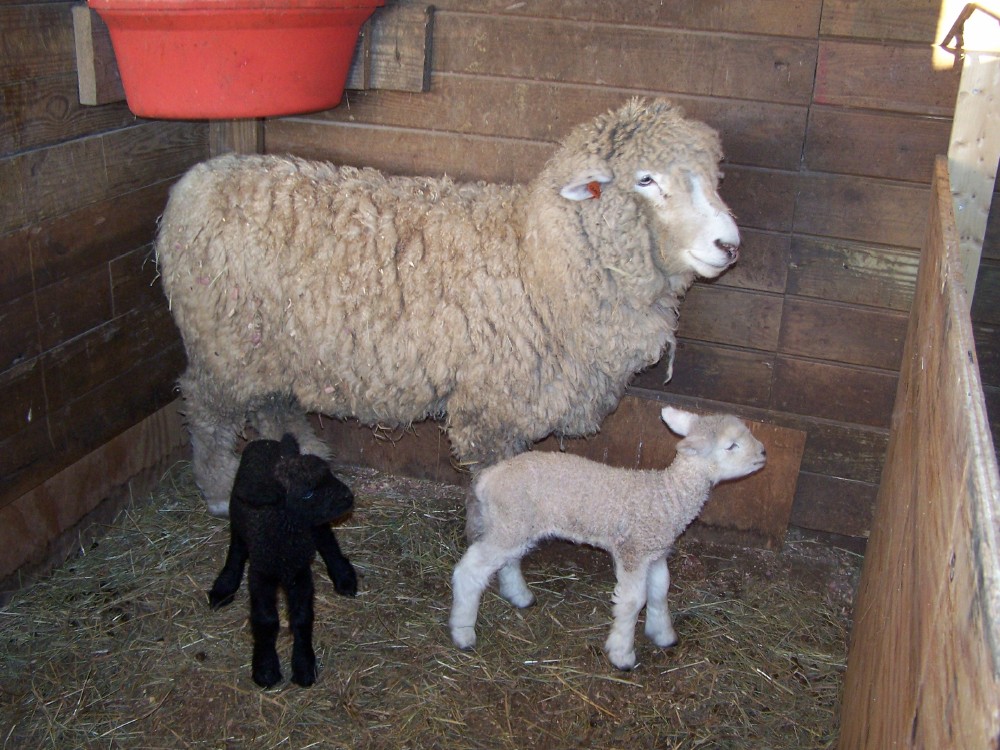 Romneys are a breed that originated in Romney, England.  They developed into this specific breed without human intervention and are a large dual purpose (meaning both meat and wool) sheep that has a long fiber.  They come in both white and black, and white sheep can carry the black gene, as seen in the photo above.  Since they are such a good breed, they are often used to cross with other breeds to improve those.  For example, the Coopworth breed enjoys having Romney in its parentage and you can see it in their large confirmation and long wool.

Romney wool usually has a long loose crimp and often have “sheen,” the quality that gives the yarn its luster.  When we selected our first Romneys, I deliberately sought the ones with the most sheen, and you can see it easily in pictures.

The first photograph is of a bulky yarn, the next a worsted, and then a fingerling weight. 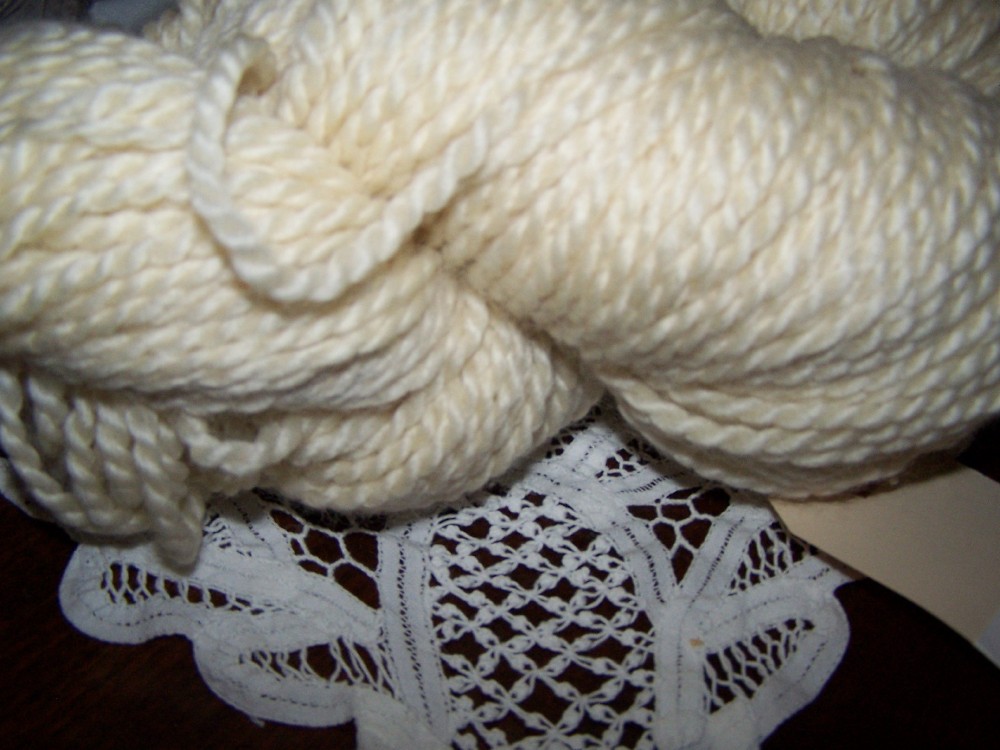 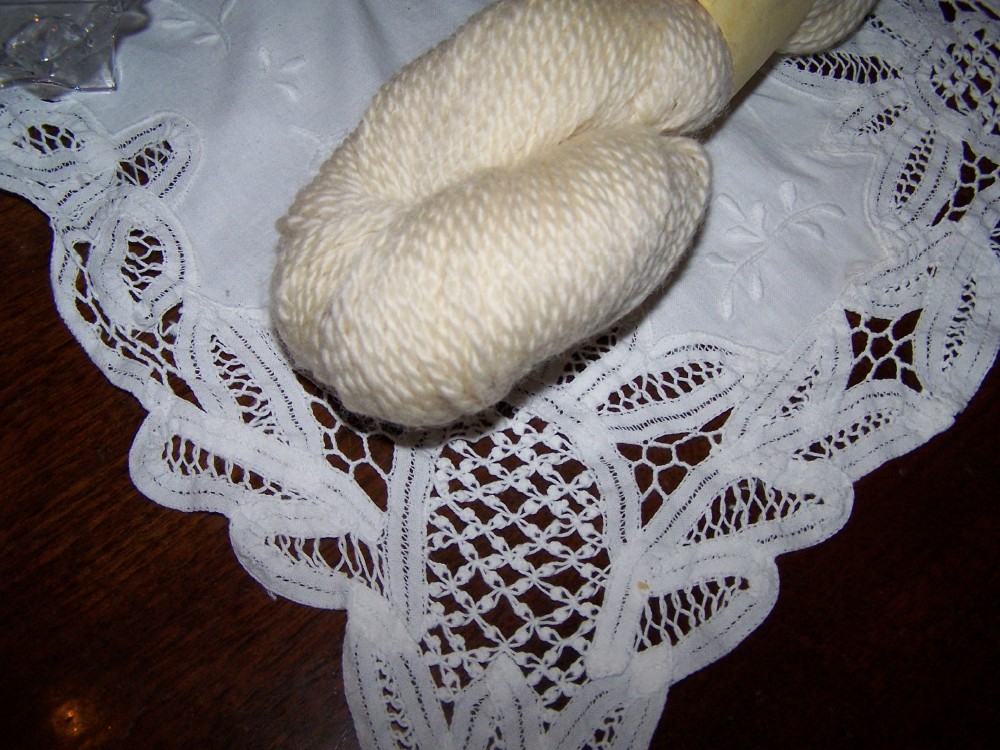 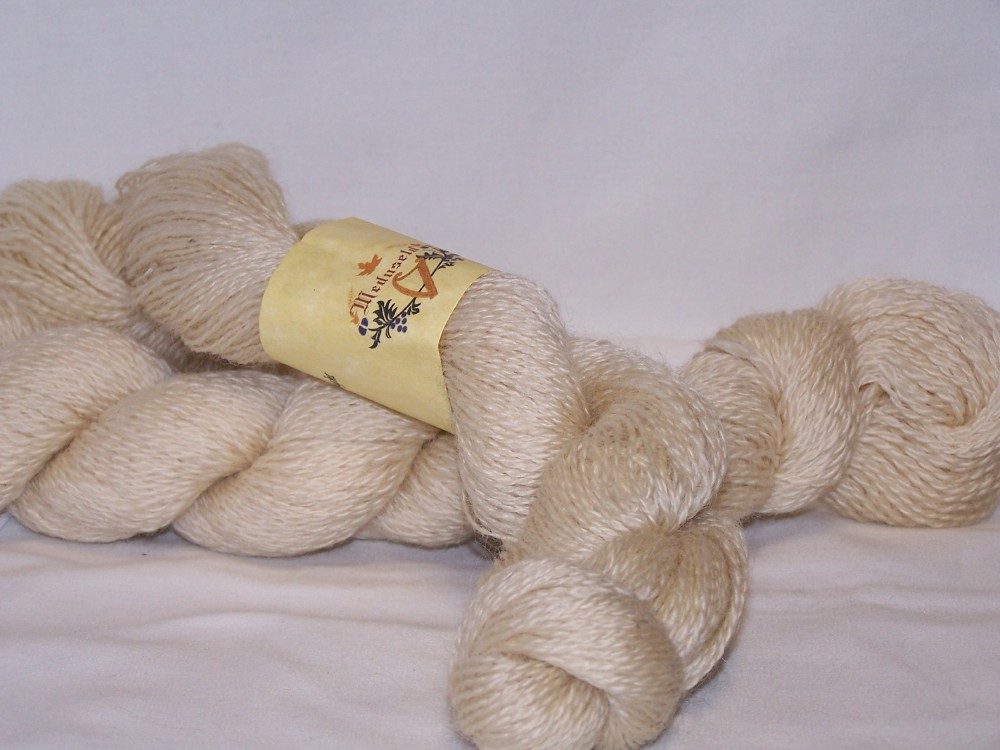 They also make a lot of yarn.  For several years we had an almost two-hundred pound Romney who created 14 pounds of wool each year.  Once it was processed, his fleece still yielded 8 pounds of yarn, an amazing achievement for one animal.  I wish I had cloned him:)

Romney yarn, due to its smooth cuticle (what gives it its luster) and loose crimp (the curls) tends to drape very well.  It is excellent for loose flowing garments, such as shawls and draping sweaters.  The yarn also makes beautiful, warm hats and scarves.  It would not be good for garment that needs lots of structure as it responds to gravity and drops or pulls from the top.   There are Romney yarns made from a tighter crimp fleece that won’t do this.

Another factor to consider is the scale that measures from course to fine.  Yarns can be lab tested for microns, or the width of each strand.  Where a specific yarn falls on this scale indicates how comfortable that particular yarn will be next to your skin.  Our Dorset Downs (not to be confused with the meat sheep Dorsets) with their ultra fine fibres, provide a baby-soft yarn.  A Romney’s yarn is more course, making it good for sweaters and outer garments.  Which is good – who would want to cover up that sheen :>)