The other day I was on the phone with my friend Esther and observed that the starlings were starting to check out our house for crevices in order to start their new nests.  The conversation turned toward the way that people see them, mostly as a nuisance for farmers.   Even the Audubon Society’s website does not mention anything interesting or spectacular about the birds.  Esther  was surprised when I shared some stories of starlings I have raised.

First some background.  The name is actually European Starling or Sturnus Vulgaris (hardly complimentary).  One hundred of them were released around the turn of the last century in Boston, MA by an individual who wanted to introduce to North America all the birds that had been mentioned in Shakespeare’s plays – at least that was one of the versions I have read.  And the story would be consistent – since Shakespeare does mention the starling in Henry IV.

The Washington Post carried an article in which they show the efforts to annihilate this bird from this continent.  The article discusses shooting, poisoning, and trapping these amazing talking birds.  Yes, I said TALKING.

I have raised several of these delightful, intelligent companions.  They are a member of the Mynah Bird family and capable of imitating speech.  Even in the wild, if you listen to one in the morning, you can hear them imitate the calls of assorted birds.  Well, they can imitate the human voice even better than parrots.  I have raised a macaw, a Senegal, an african grey, and none could come close in speech to the starling.

The first was a rehabilitation project given me by “Joan” who was a licensed wildlife rehabilitator for the Commonwealth of Virginia.  Overwhelmed with animals to care for, she apprenticed me for several.  I brought home “Francis” who had suffered enough that he promptly lost all the feathers on his head.  With care they grew back.  What we did not expect though, was his intelligence and conversation skills.  Francis quickly learned his name, calling “Francis, Francesco” through the house.  He learned all our habits, and could anticipate where we would go in the house and would fly there before we got there.  He even learned to land on a water faucet – any of them in the house – as a signal to us that he wanted water.  I would cup some water in my hand and he would drink straight from it. 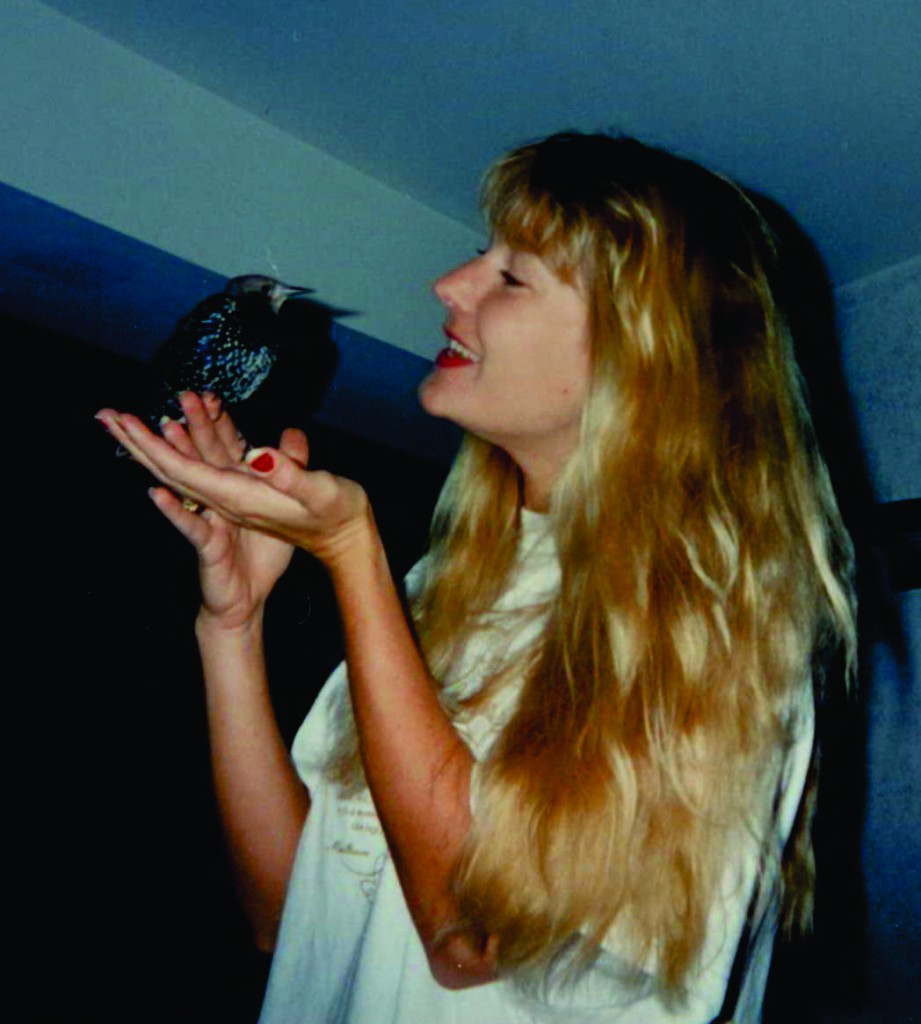 Years later I got another starling baby,and this one I named Terpsichore after the muse for song and dance.  It suited her personality perfectly.  She was joyful and sang constantly.  Her favorite words were “Terpsichore, Terpsichore, I love you Terpsichore,” said in exactly my voice, which unnerved visitors who did not know about her.  It was strange for them to look at me in one room and hear my voice coming from another.  One morning I was drinking coffee outside  and something startled her, and she flew away.  She never came back, but I felt in my heart that she was alright, and most likely causing a sensation in someone else’s yard.

I once raised a batch of three babies together and since they were raised with other birds they did not acquire the speech.  But they were endearing and closely bonded.  Once they fledged they were free to fly about outside.  They would greet me when I came home from work by flying out of the trees and landing on my head.

It turned out I was not the only person with the talking starlings.  I learned about another through a book called Arnie the Darling Starling by Margaret Sigl Corbo.  It was a beautiful story about her saving, and becoming attached to this little darling bird.  I was privileged to have a brief correspondence about our birds with Margaret.  Here is a link to her Amazon Biography page and I strongly recommend the book.

Starlings are not protected, so you can raise them.  And you may even be doing a farmer a favor by having less out there eating their crops (and save it from poisoning…).  But the biggest winner is the person who gets to share the companionship of one of these incredible birds.

Exciting news in the conservatory!  First jabuticaba blossoms starting to push out!  These are the small greenish white “nubs” you can see on the branches below.

Jabuticaba is an unusual tree in that it bears its dark purple grape sized fruits on its trunk and stems.  The tree is native to Brazil and attempts to naturalize it in warmer regions of this country have failed.  It is excellent fresh, and can also be used for wine and jams.  There are even claims of cancer fighting properties in the fruits.  The tree has a graceful shape that can that be trained as bonsai, and the leaves are similar to the olive leaves.

Elsewhere in the conservatory, the orange tree has a few lingering blossoms, but look at what’s next; Gardenia!

And while the hibiscus does not have a fragrance like the oranges and the gardenia, it is stunning none-the-less. 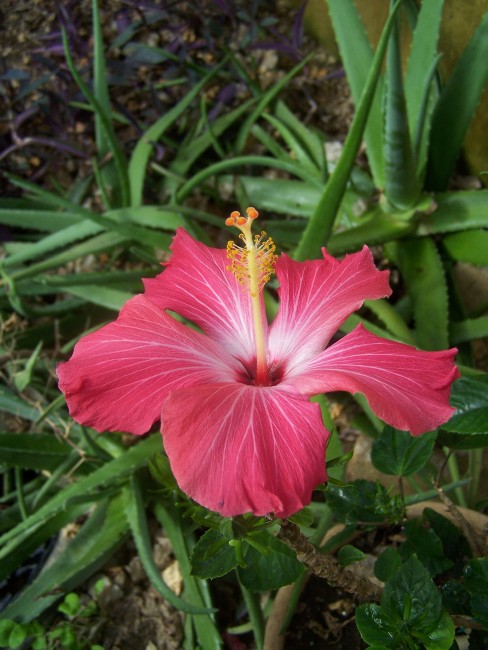 When starting seeds trays, it is very important to label the seeds.  This is especially true with plants like cucumbers that have different picking requirements – some need to be picked small or they turn bitter, others can be left to grow long.  A “Paris Pickling” needs to be picked at gherkin size, and a “Bella” at ten inches.  How can you tell this looking at a vine?  Sometimes you can’t.  This is just an example. 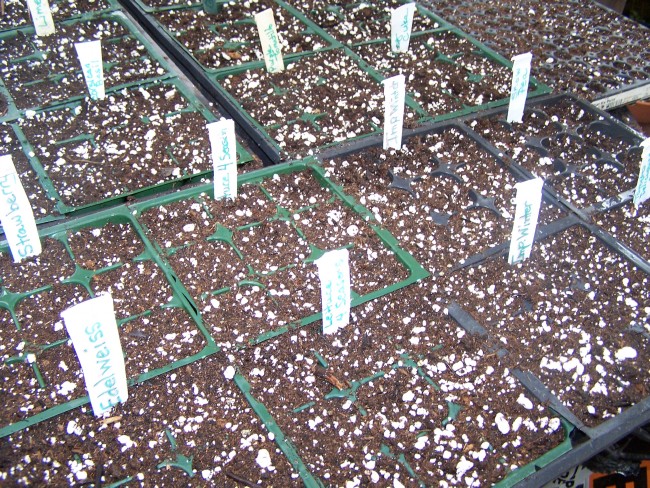 You can solve this frugally by reusing your sour cream and cottage cheese containers.  We are very fond of Daisy sour cream and cottage cheese because they use no fillers or stabilizers or anything that you can’t pronounce.   With a large family, we eat a considerable amount of these weekly.  While many of the tubs are used over and over for leftovers and my husband’s lunches, we still end up with stacks of them that I am reluctant to throw away.

So I have found another use for them.  Using sharp scissors, I cut the base off about 1/2 inch up from the base.  This forms a little “dish” that you can use as a tray under small pots.  With the remaining sides, I cut strips just wide enough to write on with a permanent marker.  If you have seen the cost of plant markers in nurseries and gardening catalogs, you will see that your savings can be substantial.  When I am done using them, I put them all in a pot and often reuse them. 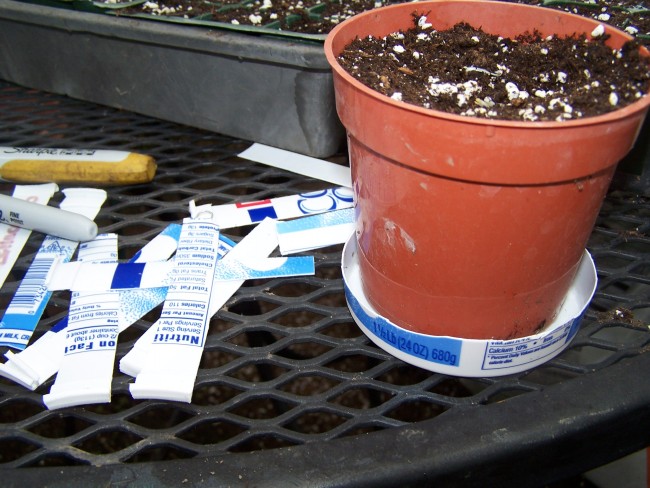 It’s only 10 degrees this morning, and forecasters are threatening us with another snow storm.  The best response seems to be to snuggle up with a good book and some cinnamon rolls.

Combine flour, milk, eggs, half a stick of butter, 1/2 cup sugar, vanilla, and yeast to form dough.  I place all these ingredients in my bread machine on the dough cycle.  If doing by hand, I recommend combining the moist ingredients (melt butter gently) and blend into the dry ingredients.  Add flour is dough is still too sticky.

Allow to rise in a covered bowl until doubled in size.

Knead dough and let sit for 10-15 minutes.  Letting it rest will make it easier to roll out with a rolling-pin. 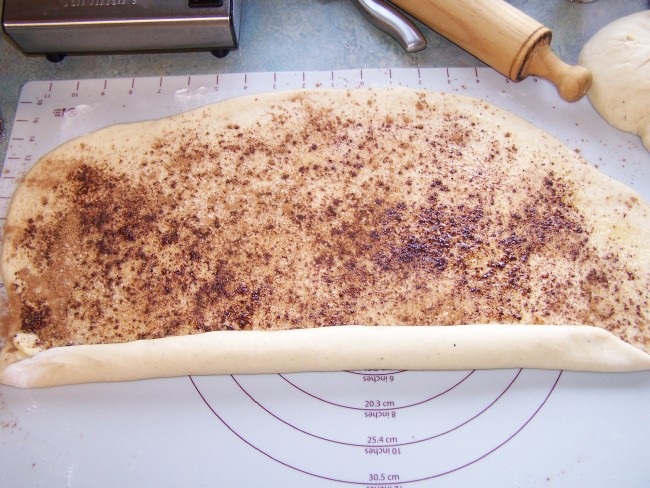 Cut the rolled dough so that the swirls are exposed, in about 2/3 inch sections. 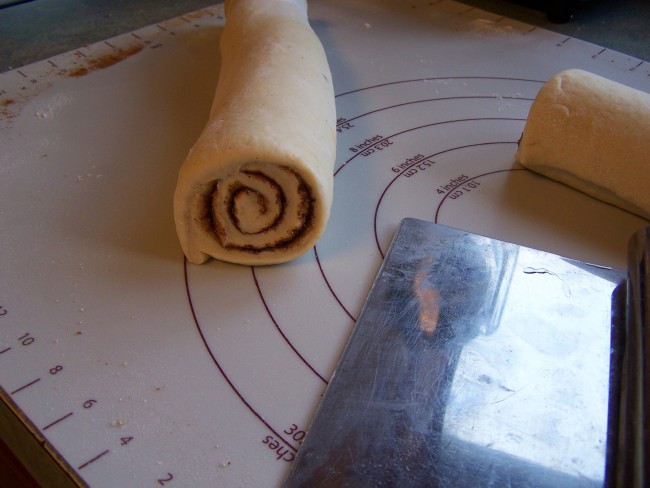 Place them in a flat baking pan and allow them to rise until doubled, again.  Bake in a preheated 400 degree oven for about 20 minutes.  When finished we often pour additional butter or honey over the rolls, but this is optional.  In my opinion, more butter is better 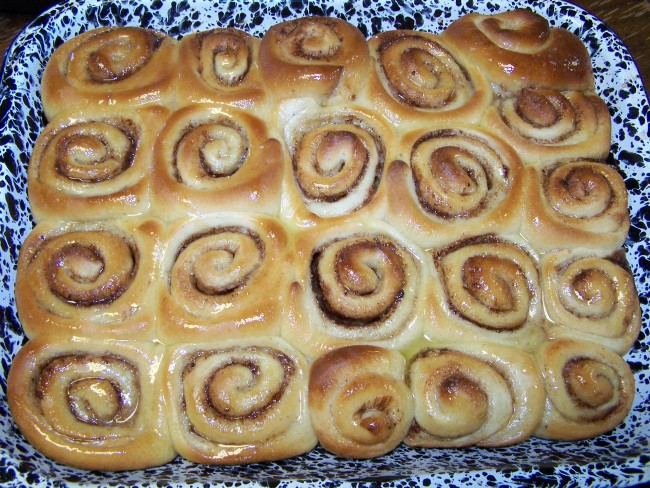 You are ruining my view.  Not in the way you’d expect.  I actually can’t see you from where our farm sits, but you affect my view day and night, none-the-less.

You see, it’s your lights.  Years ago when we bought this farm, we choose it for its remote location.  We didn’t want city lights obstructing our view of the stars and the Milky Way at night.  Our view was stunning.  In your artificial light filled nights, you can’t imagine the display of the heavens you are missing, the frequent meteor showers, the mysterious glow of the galaxy.

And then Walmart put in a new store on Route 50 near the Hospital.  This Walmart is open 24 hours a day and they light up that sprawling concrete parking lot all night long.  Since, other business have been built along that area.  Now, to look east at night is reminiscent of seeing the lights coming from Mount Doom in Mordor  in the Lord of the Rings.

During the day, we have a daily reminder of Winchester’s electrical consumption.  Our formerly pristine view is now scarred by enormous power lines that cross the mountain, in response to the increase demands of Winchester and the DC metropolitan area.  You have no idea how many acres of woods and farms were stripped to make way for these lines.  It just hardly seems to be “environmental.” 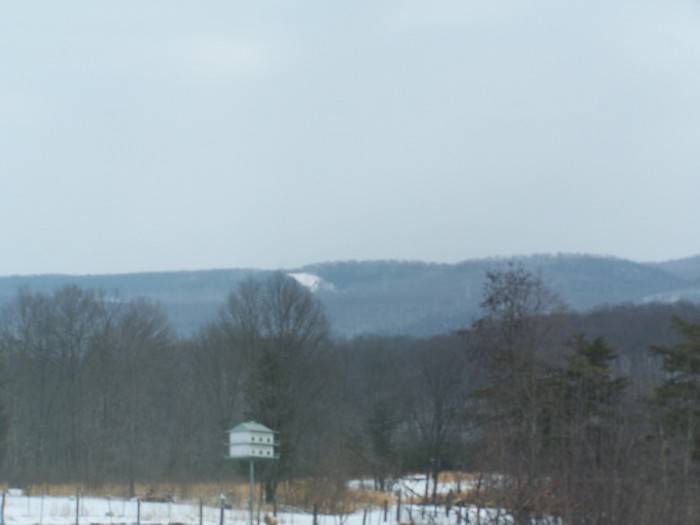 There are lots of options for those who wish to conserve energy, and the view for that matter.  Lights for security at night can be switched to motion detector lights that do not have to be constantly on.  Human beings used to live more closely tied to the cycles of daylight, and now many stay up late and start their days even later.  Perhaps living more closely to Benjamin Franklin’s advice:  “Early to bed, early to rise, makes a man healthy, wealthy and wise,” would apply here, with the added advantage that it might save thousands of miles of electric poles and preserve the views of the stars and night sky.

Dear Winchester, could you please turn off your lights?

While we got seven inches of snow yesterday, it still looks and feels like paradise in the conservatory.  The plants have also noticed the lengthening days, and are starting to prepare for the new growing season. 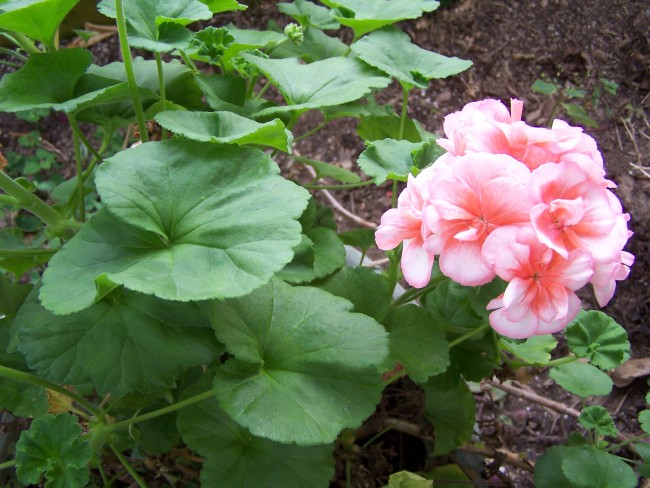 The geraniums, while still green, were in a semi dormant state.  Now they have burst into bloom. 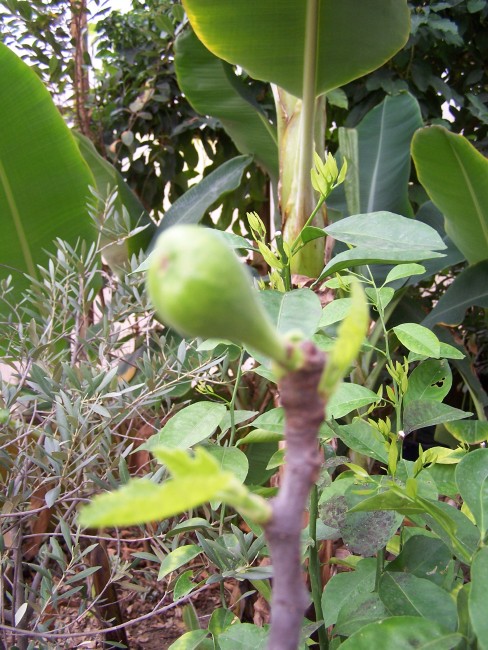 The fig tree is pushing out new leaves, and has already started forming fruits. 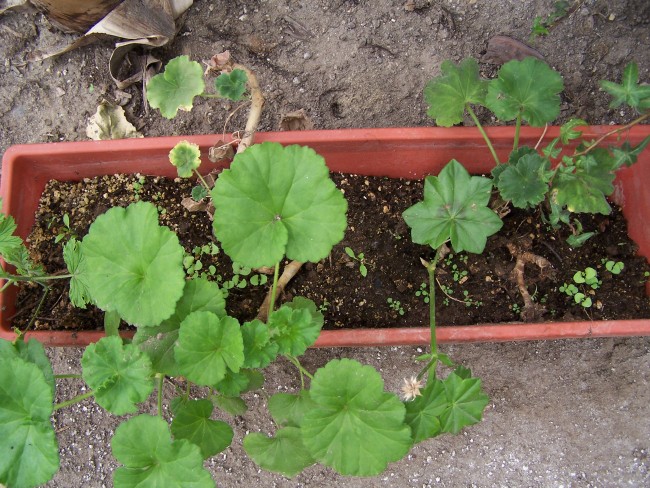 We have started the geranium cuttings for the summer window boxes. 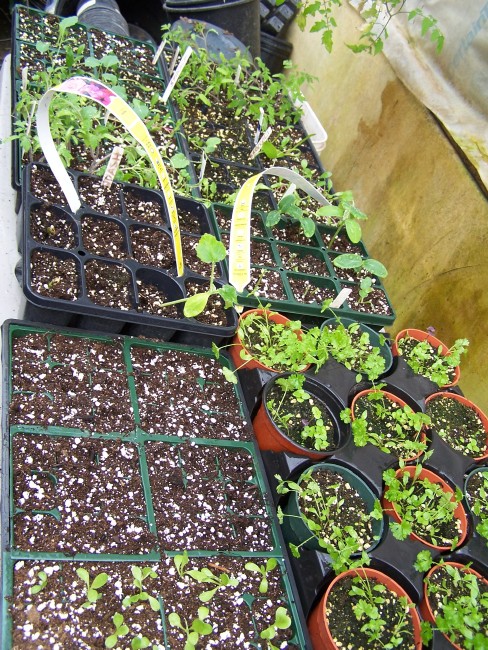 Seeds are off to a good start, at least the ones spared by the mouse. 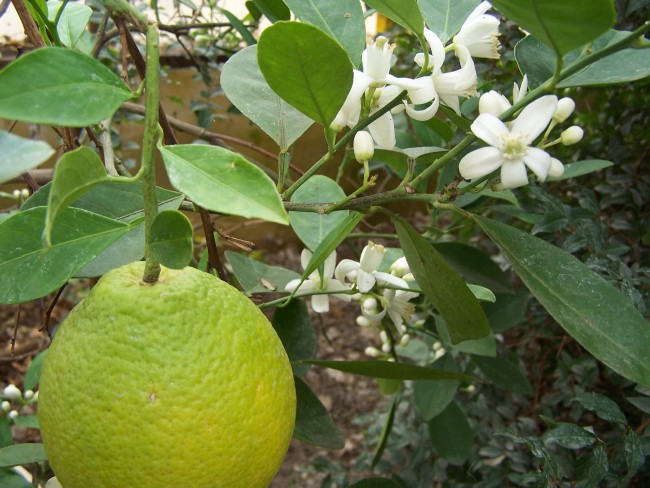 I wish this photo were “scratch and sniff.”  The orange blossoms have released a heavenly scent that fills the entire conservatory.

A yellow pear tomato hiding in the foliage.

I have received some questions about our conservatory.  It was built by my husband.  His company builds these and new homes in the Northern Virginia and West Virginia Panhandle.  You can see some of his work here!