It’s so fun to see progress in the garden.  Last month, I posted a photograph of our permaculture garden. 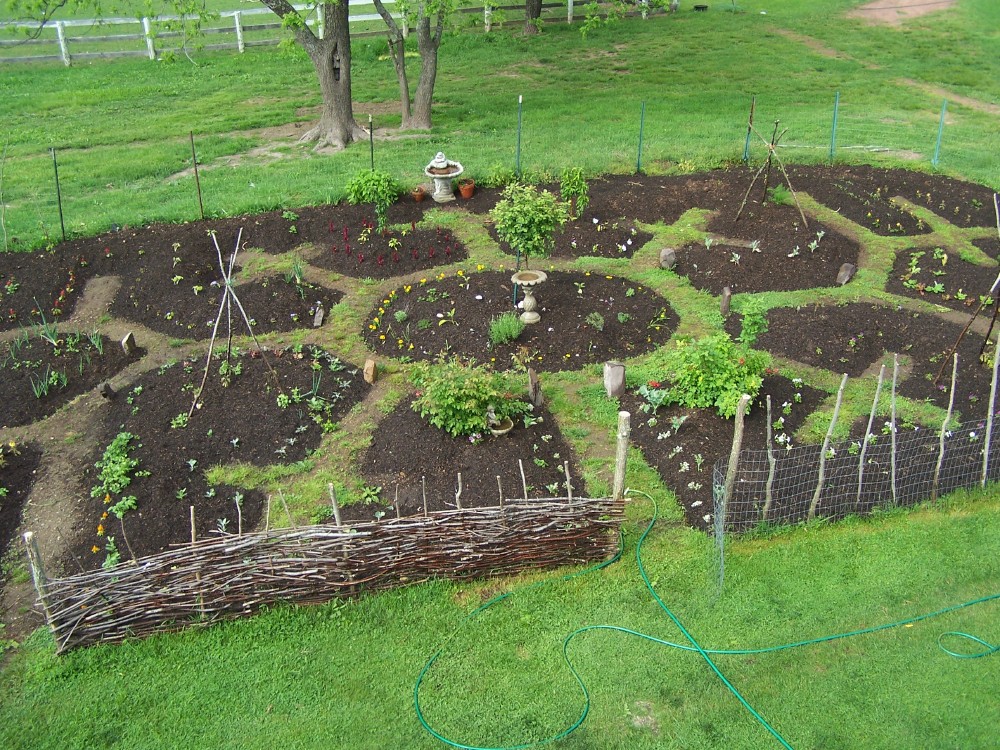 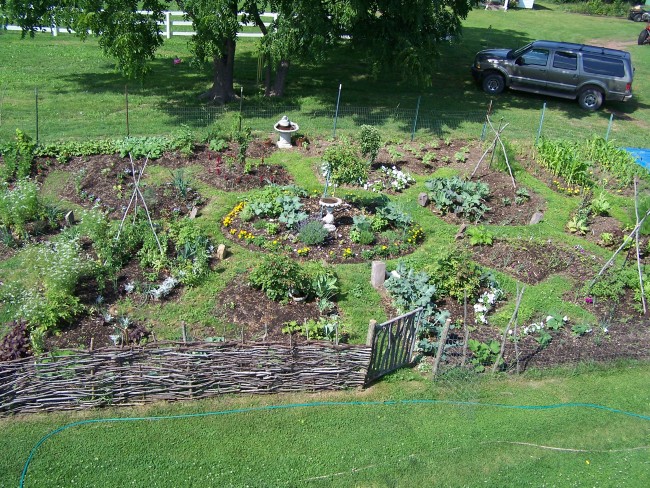 It is amazing to compare and see how the garden has taken off in the last month.  We have enjoyed its bounty already, having harvested lettuce, cilantro, broccoli, onions, basil, and a few fava beans.  I also harvested an abundance of rose petals for the rose petal jelly.  Very soon we will have green beans, tomatoes, Napa cabbage, cucumbers  and peppers.

Here is the progress of the hoop houses.  In the first we have established herbs that we harvest throughout the four seasons: lemon thyme, rosemary, sage, mint and oregano.  In their protected enclosure these herbs are available even in the coldest months of the year.  In this hoop house we have pole beans growing on the rear right side and cucumbers on the rear left.  On the front right you can see a raised bed that has been planted with melons that have yet to emerge, and on the left, you can see one of our son’s small garden which provides quite a bit of food for such a small space.  We have already had turnips, chard and beets from his small patch.

In both hoop houses I have planted assorted gladioli bulbs.  I love having cut flowers in the house and these are some of my favorites.  The down side is that in this 6b agricultural zone, they would have to be dug up each fall and replanted.  By growing them in the hoop houses, I don’t have to dig them up and still can enjoy their flowers.  The other nice thing is that while we had chickens in the hoop house for seven weeks, they did not touch or eat the gladioli.  You can see them standing in the rear of this otherwise empty hoop house. 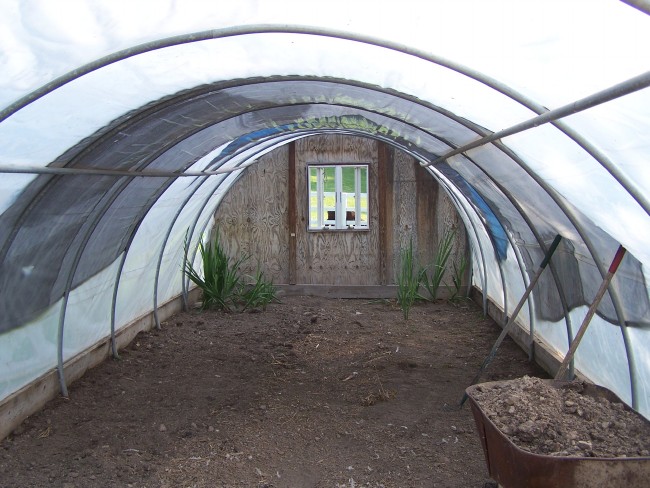 It is almost ready for planting.  The wheelbarrow on the right contains more compost to be worked into the soil.  The days have been so hot lately that doing manual labor in here was impossible.   The heat-loving plants such as cucumbers and melons have already been started in the conservatory, though, and are ready to move into their new home.

Finally, here is the row garden.  It is nearly 100 feet long and has three rows of black plastic with drip irrigation underneath.  Compost was incorporated into the soil as the rows were prepared, and you can see that the plants are thriving.  The row on the left was planted in only the last two weeks, while the rows on the right are just over a month old.  We have already harvested an assortment of summer squash and zucchini and have our eyes on some fine clusters of tomatoes that should be on the menu soon. 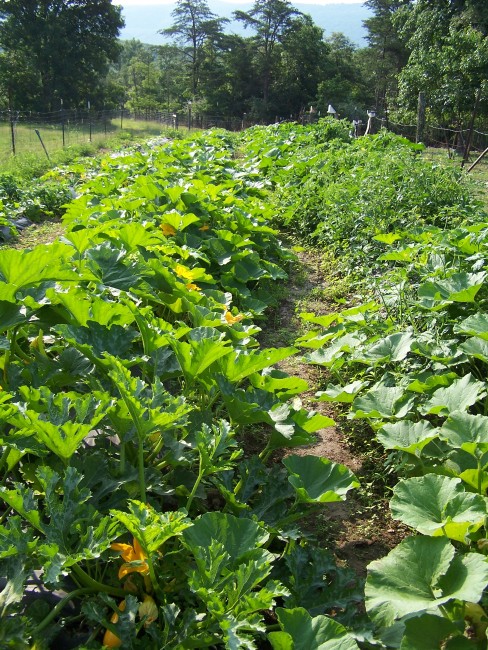 If you look at the posts surrounding the garden, you can just make out bird houses.  Some of these birdhouses are currently inhabited by Eastern Blue birds.  When we approach the garden, pairs of these little birds fly out of the garden where they have been searching for insects.  We can enjoy their help because we don’t use hazardous sprays on the plants.  It is an example of finding systems that complement instead of destroying.  As Eliot Coleman said:

“We live in a world that has practiced violence for generations – violence to other creatures, violence to the planet, violence to ourselves.  Yet in our garden, where we nurtured a healthy soil-plant community, we see a model of a highly successful, non-violent system where we participate in gentle biological diplomacy rather than war.  The garden has more to teach us than just how to  grow food.”

While Eliot does not include animals in his statement above, in practice both he and we include them in our systems.  He describes his ducks that help weed his gardens.  Here at Meduseld, we include all our livestock, the pigs, sheep, etc., as well as chickens and birds in the cycles of farm production.

As promised, we are starting with the first post about winter farm activities, and it is one of our personal favorites.

We began hoop house, or tunnel gardening after I bought Eliot Coleman’s book, The Four Season Harvest, as a Christmas present for my spouse.  We started our first hoop house that January, a small structure, only 12×16 feet, made of PVC pipe and some boards.  By March we were enjoying salad, radishes, and cilantro.  That winter may have been a warmer winter than most, but we were sincerely impressed with our first attempt. 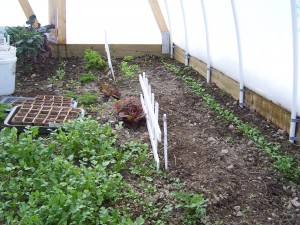 Inside first hoophouse. First year. This also gives a good look at the PVC bracing for do-it-yourselfers who want to make one for yourselves.

That little structure is now gone and has been replaced by two sturdier versions made of bent fencing and a wood “foundation.”  Both are set directly on the ground and we plant directly in the soil.  We have one layer of agricultural plastic on one and two layers on the other.  Each layer is supposed to give us approximately one more agricultural growth zone, but we find that the extra layer actually reduces the amount of sunlight, so you don’t actually get two full zones.  Meduseld is in a 6b agricultural zone, and we are not getting to 8b with the extra layer.  We find that the plants in the one layer house seem to do better, and when the weather warms, we will reduce the other to one layer as well.

We have been working on amending the soil gradually and I wish we had focused on this more during construction phase.  We have still had to contend with insects and less than ideal growth at times, and we think this is due to the fact that we did not follow all Mr. Coleman’s advice about soil amendments, especially copious amounts of compost.  Over the years, we have gotten better at composting, and hopefully this will pay off.

None-the-less we have enjoyed chard, lettuce, fresh herbs, brassicas, every year since but one.  That year was exceptionally cold and there was not enough sunlight to warm the soil during the day.   We could have resorted to heating the tunnels, but that seems contrary to what we are trying to achieve – namely growing produce without consuming non-renewable energy.

Hoop houses are wonderful for rotating “crops” and for extending growing seasons.  There is also no waste.  Anything that does not do well,  becomes overgrown, or gets insects, becomes chicken feed.  We see this as a win/win situation even if we can’t put something on our table – we’re certain the chickens are glad for fresh greens in the middle of the winter, or as the case today, right after a snow storm.

Mr. Coleman’s book had excellent charts with plants that can be grown during the winter months and that are tolerant to cold temperatures.  We strongly recommend this book and it is available in the Meduseld Amazon store.